Recently, there has been a lot of information and misinformation disseminated about Harness Hang Syndrome (HHS) resulting in the impression that some ascending systems cause HHS and others do not and that HHS is not of general concern. To clear up this confusion, we’ll cover the history of the testing that has been done, the results of those tests and the conclusions obtained. HHS, the rapid loss of consciousness followed by death due to hanging immobile in a harness, happens in ALL harnesses and ascending systems. Someone hanging immobile in a seat harness is a serious medical emergency that must be dealt with immediately.

In 1978, Maurice Amphoux, a doctor involved in industrial safety research in France, performed a short series of tests in order to determine what harnesses would be best for workers to use when working at height. At the time, it was a standard practice for workers to use simple waist belts even when a significant fall was possible. Dr. Amphoux was using a parachute harness for the tests and found, much to his surprise, that the test subjects lost consciousness after a few minutes of hanging in the harnesses. One subject lost consciousness in only 3.5 minutes! He performed some more tests a little later under better controls and found that the subjects experienced cardiac arrythmias at the time they lost consciousness. Dr. Amphoux discontinued the tests because of concern for the safety of the subjects. He then published his findings, trying to get the word out about HHS. The French caving community was notified but the news was greeted with skepticism.

In 1984, the newly-formed Medical Commission of the French Federation of Speleology (FFS) decided to do some informal HHS testing to see if Dr. Amphoux was right. The Commission had two subjects hang immobile in their standard caving vertigear (Frog systems) with no particular controls. One subject lost consciousness after about 30 minutes and the other lost consciousness after only 7 minutes! The testers were horrified and discontinued testing out of fear for the safety of the subjects. The Commission decided to fall back and come up with some new protocols for the testing. After seeing what happened, the Commission began to suspect that some fatalities that had been formerly attributed to exposure might have actually been caused by HHS.

The first subject was positioned as if he had been ascending (with a Frog system) and simply stopped and became relaxed (as if completely exhausted) with neck in hyperextension, arms dangling at his sides, legs extended and feet in the footloop. The subject complained of extreme discomfort from the neck position just before HHS symptoms set in. The subject’s head was then supported to see if the HHS symptoms could be alleviated. The symptoms did subside but then reappeared within a couple of minutes and progressed until the subject lost consciousness.

The second subject hung in the same position as the first but with his head supported by a padded stand. HHS symptoms began to appear anyway. At the onset of the symptoms, the testers had the subject move his legs some. This caused the symptoms to subside. However, once the subject became immobile again, the symptoms reappeared rapidly and progressed until he became unconscious.

The third subject hung with head supported but with legs pulled up, feet even with his butt as if he had been about to take a step up with his Frog system. Even with the legs much higher than with the previous two subjects, HHS symptoms appeared and the subject lost consciousness. Further, even though this subject was lowered and released before the symptoms got extreme, he lost consciousness anyway.

More testing was done in 1986 by Jim Brinkley at the Aerospace Medical Research Lab, Wright-Patterson Air Force Base, Ohio with better controls that those used by the FFS Medical Commission and the results were the same. Brinkley used Class III industrial harnesses (very similar to a parachute harness) and found that HHS occurred very consistently in all test subjects.

So what are the symptoms of HHS? The FFS testing showed that HHS symptoms appeared in no more than 10 minutes with healthy subjects. Brinkley’s research showed that 6 minutes was the normal onset time. Keep in mind that Amphoux’s tests had one fellow lose consciousness in 3.5 minutes. HHS symptoms begin with an overall feeling of illness (as with a flu bug) followed by excessive sweating, nausea, dizziness and hot flashes. Testers noticed that the subjects had obvious brain function impairment with the initial onset of HHS that worsened very rapidly. As HHS progresses, the symptoms worsen with difficulty in breathing, increasing heart rate, progressively worsening cardiac arrythmias, an abrupt increase in blood pressure followed by unconsciousness. Death would follow within minutes if the subject were not released quickly.

What causes HHS? No one is entirely sure. First thoughts were that pressure on the neck from the chest harness shoulder straps might be a cause but testing ruled that out. Some testers believed that it was the type of seat harness, but the fact that caving harnesses, parachute harnesses and Class III industrial harnesses all cause HHS indicates that this is not true as well. Another theory was pulmonary impairment, but blood gas testing ruled this out, too. Most of the testers believe that HHS is caused by blood being trapped in the legs so that the net result is similar to hypovolemic shock. No blood is actually being lost, but the amount of blood available in the torso to keep the brain and vital organs sufficiently perfused with blood is inadequate nonetheless. There are likely some blood chemistry problems occurring as well. Until more testing is done with state-of-the-art equipment, no one will be absolutely certain. However, there are some conclusions we can make now.

First, hanging immobile in a seat harness is the root cause of HHS. Any caver who has done much vertical work has hung in his harness for much longer than 10 minutes and had no problems. But he was not immobile. As long as you are squirming around, shifting your weight and keeping busy, HHS is not an issue. The problem occurs when a caver, perhaps exhausted or cold, tries to ascend a pit and gets hung up somehow. Most of the French fatalities were inexperienced cavers who had technical trouble with their gear and were not knowledgeable enough to correct the problem. Already tired from caving, the cavers struggled with the gear until completely exhausted, then HHS set in and they died.

Second, someone hanging immobile in a harness - any harness - is a dire medical emergency. The FFS testing showed that 10 minutes was the usual onset time in a healthy subject. If someone is stranded on rope underground, it’s likely that they are tired and cold so you can expect HHS to set in much more rapidly. Cavers that witnessed two of the French fatalities said that once the caver on rope stopped struggling, unconsciousness and death occurred in less than 10 minutes.

Third, preventing HHS is the best course of action. The articles on the testing done by the FFS were unclear as to how much effort was needed to revive the test subjects once they lost consciousness or what their condition was once revived. Certainly, the best thing is to make certain that it never happens in the first place.

Finally, most cavers on a vertical caving trip should know how to do a pickoff (single rope rescue), if not everyone. If someone in the caving group does get hung up somehow, do not allow them to struggle for any length of time. If the stranded caver can’t correct the problem on the first try, he probably won’t get it on the second or third. Remember that the FFS subjects experienced progressively worse brain function impairment as the HHS symptoms began to set in. This means that not only is the exhausted caver getting more exhausted, he’s also getting more stupid. Someone should be headed up (or down) the rope to assist the stranded caver shortly after that first attempt at correction. The would-be rescuer might be able to simply assist and thus correct the problem. Or the rescuer may have to pick the stranded caver off and get them back to the bottom of the pit. Either way, knowing how to do a pickoff should be mandatory and all the cavers on a trip should be ready to use that knowledge quickly.

Joe Ivy was a caver from Texas who sadly died in a caving accident in 2000.  This article is reproduced with the kind permission of his partner, Rebecca Jones.

Some of our pictures 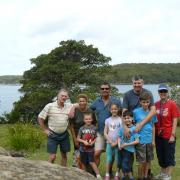 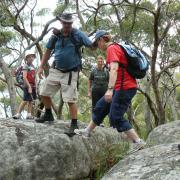 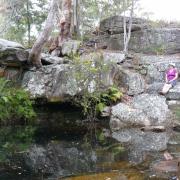 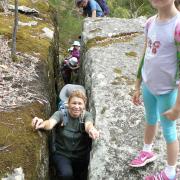 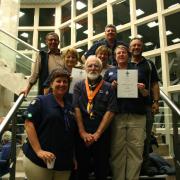 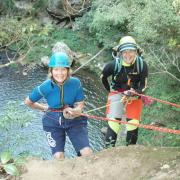 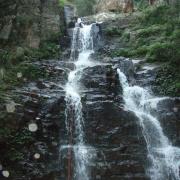 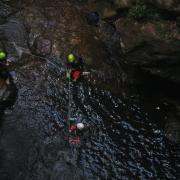 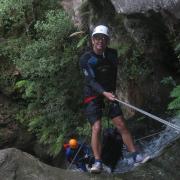 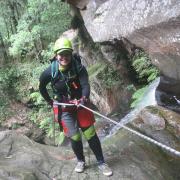 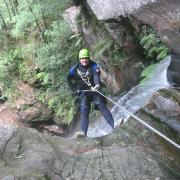 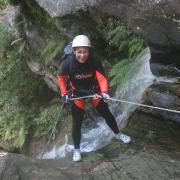